Yesterday Dakar Rally 2018 drivers Saulius Jurgelėnas and Vaidotas Žala visited Klaipėda’s FEZ and shared their experience of completing the arduous course. They explained how by working together they were able to face up to and overcome huge physical and emotional challenges to successfully achieve their goal – the finish line.

Having overcome the race’s 14 demanding stages, Vaidotas Žala and Saulius Jurgelėnas finished the rally in impressive 18th position. “We are proud to have joined the small community of sponsors for this ambitious team of racers, and proud to have had the opportunity to support them enthusiastically throughout the rally. Today, this pleasure has been doubled by having the chance to share their joy and hear their impressions alongside our FEZ community members,” commented Eimantas Kiudulas, Head of Klaipėda FEZ.
“It was a 9,000-km-long route, nearly 4,500 km of which were speed sections that needed to be raced. And we were getting through only 7 per cent of the route each day. This meant that to reach the finish line, we had to forget what had happened the day before and concentrate only on the current moment and think about tomorrow,” V. Žala explained. “The route was long, so for the first few days every 20-50 km or so, Vaidotas would ask how far we had gone, but he stopped this on day 3. You forget about it and just go,” commented S. Jurgelėnas.

Saulius Jurgelėnas also remembered how often the temperature fluctuated during the race- varying from 0C to 40C. This meant that sometimes the temperature in the car would reach a sweltering 60C. “Then I’d take off my balaclava and hold it out of the window to cool it off, later I’d use it to cool myself down,” he recalled.

The drivers shared that in the rally, as in life, not everything depended on physical or technical preparation. They remembered a crew of Dutch brothers, who were always well-mannered and in good spirits. “It was only due to their enthusiasm and their ability to communicate that this team was able to finish the Rally – when their car broke, which it did on more than one occasion, they were always able to find someone to help them. Without this constant help, they would never have reached the finish,” – remembered S.Jurgelėnas and V.Žala. Dakar is a big festival in Bolivia. Roads are closed so that the racers can move unhindered through the course, and the route itself is lined with well-wishers for dozens of kilometres. “It’s nice, but for us the best part of the course was a 20 km stretch of beach. It was probably the only occasion and place in the world where it was possible to drive a car alongside the ocean,” – the drivers reminisced. The team arrived at the event along with their racing car “Toyota Hilux”. Car enthusiasts and the general public alike had the chance to get a closer look at the car, and most were impressed by its technical specs, especially its 500 liter engine. During the meeting, the drivers awarded the winners of the Dakar Rally 2018 totalizator that was initiated by the Klaipėda FEZ. The winners had to successfully guess what place the community-supported team would take during the Rally. More than 100 employees of the Klaipėda FEZ companies participated in the tournament, and 12 participants guessed the results of Saulius and Vaidotas. The event was held at Enter Cafe located in Klaipėda FEZ. 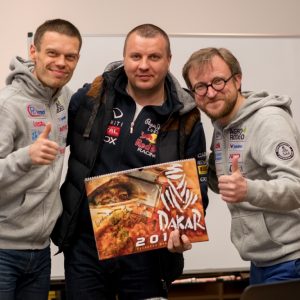 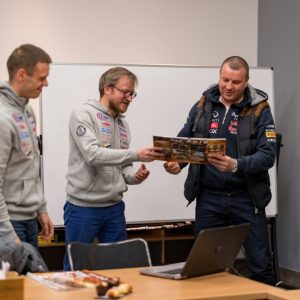 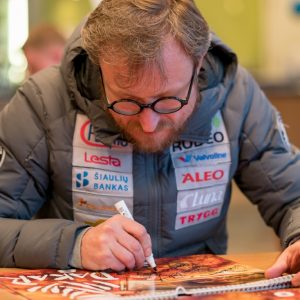 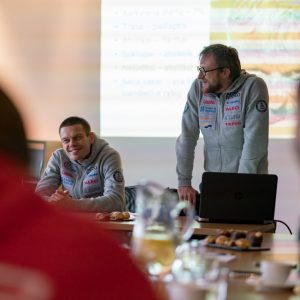 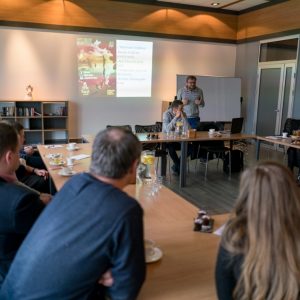 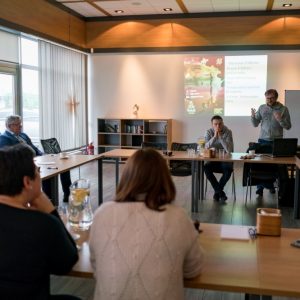 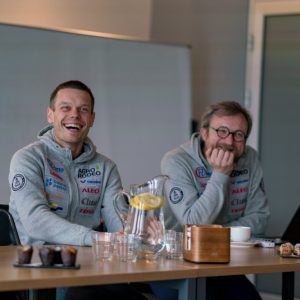 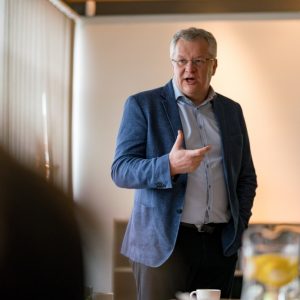 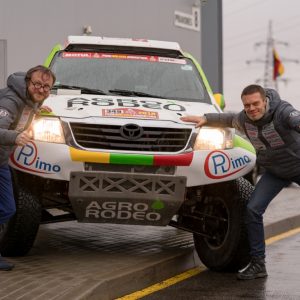