The largest of the Baltic states, Lithuania is part of the Schengen area and a full-fledged member of the EU and of NATO. The country has the euro as its currency. So why is it that it still tends to be a somewhat unknown entity to many outside of central Europe? Plastics News Europe was invited to visit – and came away impressed. 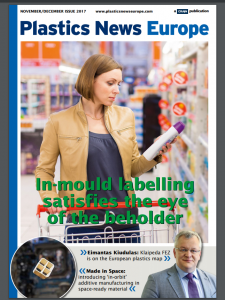 Lithuania, as it turns out, has quite a lot to offer. During a two-day visit to Klaipeda, which is the northernmost year-round icefree seaport on the Baltic sea, it emerged that in addition to a number of innate advantages, Lithuania has created a raft of interesting opportunities for businesses looking to set up shop there: starting a business in Lithuania is a simple and straightforward process, involving just two procedures, taking 3.5 days and requiring no paid-in minimum capital, if the World Bank’s Doing Business 2016 study is to be believed.

The country has put in place facilities ranging from tax incentives and a simplified customs regime to the availability of a complete engineering infrastructure.

This includes the ICT infrastructure, which as the country was quick to realise, plays a pivotal role in innovation and, more broadly speaking, in business and investment decisions, as well.

“So, now, according to the most recent analyses on 4G coverage around the world, Lithuania ranks first in Europe and third globally for 4G internet coverage”, said Arnoldas Dapkus, investment advisor manufacturing at Invest Lithuania. “Fibre to the premises coverage has reached 95% already.”

After gaining independence in 1990, the country also invested strongly in its transportation network – the country has only a small domestic market and, after joining the EU, needed to ensure access to the major European markets. The port of Klaipeda already handles over 40 million tonnes of cargo and is growing strongly. A well-maintained railway system transports this efficiently and quickly from the port to the hinterland, while the road network provides easy connections to the other Baltic states, Russia and Western Europe. Additionally, Klaipeda is only 35 km away from the nearest international airport.

All in all, it is hardly surprising that it was here that the Lithuanian government decided in 1996 to establish one of the in total six free economic zones in the country. Free economic zones (FEZ) are found around the world and are areas in which companies are taxed very lightly – or not at all – to encourage economic activity. The taxation rules are determined by each country.

The Klaipeda Free Economic Zone has an area of 412 ha and offers companies ready to build industrial sites with the physical and legal infrastructure and support services they need to get started. To date, 27 companies employing over 2,500 people have signed agreements to operate in Klaipeda FEZ. Two-thirds of the companies are foreign capital companies. Most of the products produced in Klaipeda FEZ are intended for export.

The real estate taxes are 0% up to 2045, corporation tax is levied at a rate of 0% the first 6 years and at 7.5 in the subsequent 10 years. There is no tax on dividends. Grants are available for investment in R&D or infrastructure, as are subsidies for employee improvement and training. “Lithuania has a very highly-trained workforce, with a very high percentage of graduates from tertiary education,” Arnoldas Dapkus emphasised. “Especially the Nordic countries know this and take advantage of the quality of our workers.” Moreover, wages in Lithuania are low. “The cost of labour here is four times lower than the EU average,” he said.

Klaipeda FEZ is an important motor of the economy of Klaipeda county, accounting for 40% of the foreign direct investment in Klaipeda. In fact, it this year received five awards at the Global Free Zones of the Year 2017 rankings, published annually since 2010 by the Financial Times’ fDi Intelligence service.

“We are most attractive to companies working in the vehicle, plastics, and food industries, and we also see considerable potential for the energy industry,” said Eimantas Kiudulas, CEO of Klaipeda FEZ.

Especially plastics: Klaipeda FEZ was the only free economic zone in 2017 to receive the Specialism award in the plastics industry.

‘However, we also see Klaipda in the spotlight of a promising bioplastics industry in the near future together with Klaipeda ‘s municipality,’ said Kiudulas.

Investors come to a FEZ, he said, because of tax concessions, but also because of the available infrastructure, experience, and ecosystem created by successfully operating companies.

“This is further strengthened by the institutions of higher education in the Klaipeda region with which strong R&D partnerships exist,” said Kiudulas – a visit to one of which, namely Klaipeda University’s plastics testing lab – was included in the tour that was arranged during the visit to the country.

These institutions also contribute significantly to the innovation potential of the region. Plastics News Europe was treated to a ride on one of the more visible developments illustrating this potential: the Dancer bus, a new generation lightweight electric city bus. According to project manager Tadas Kubilius, the bus is “the world’s first composite electric bus.” At a mere 6 tonnes, the bus is half of what a normal city bus weighs thanks to the use of glass-fibre composite materials for the body. The forms were made in Sweden.

“Our prototype is based on the platform of a stripped down old Škoda TR14 trolleybus, so it is a standard size,” explained Kubillius. “But it’s a total rethink of the concept of the bus: there are sensors all around – no side-view mirrors are needed – and it is equipped for the Internet of Things. We have also rethought the idea of range. A city bus drives specified routes that are usually not that long. We have therefore opted for batteries with a 50-km range, that can be charged within 6 minutes, rather than trying to go as far as possible on one battery charge.”

The bus is a project of UAB “Vejo Projektai”, a Lithuanian and German capital company, developing renewable energy powered electric systems for international markets. While currently still a prototype, it will hopefully be taken into production next year. “We hope to have produced 1000 units by 2025,” said Kubillius.

Among the companies toured in the Klaipeda FEZ were the two major PET producers with operations in Klaipeda FEZ: Orion Global PET (OGP) and NEO Group, a major PET producer with two production lines and currently accounting for 12% of European PET production. The visit included a tour of Ani Plast, a Russian-owned mid-sized injection moulding operation equipped with modern German-made injection moulding machines, specialised in the production of polypropylene plumbing system.

Klaipeda FEZ, said Ani Plast CEO Ruslan Dontov, was chosen as the stepping stone to enter European markets. The company first established a sales office, but, swayed by the convenient location and the various financial incentives, it was decided in 2015 to build production capacity on the site, as well.

For PET-producer Indorama, OGP was also the first venture into Europe. The plant started commercial production in 2006 with an annual capacity of 198,000 tonnes and has now debottlenecked to 241,000 tonnes, making it the largest single line plant in Europe with the lowest carbon footprint. It is the largest greenfield investment of Asian capital in Lithuania.

At Neo Group, a third production line is under construction that is scheduled to come on stream during the first quarter of 2018. “Our aim is to become the number 2 PET producer in the world,” said Ruslanas Radajevas, production director at Neo Group. “In 2004, we were the biggest greenfield investment made in this zone.” The company has since worked consistently to increase efficiency – in terms of production, cost and energy. “Since 2011, we have produced aromatic polyester polyols from our waste, and we recently doubled that capacity in the second quarter of 2017; we also produce green energy from wood and lignin, resulting in very low CO2 emissions, so we also pay attention to sustainability and are involved in the community. We are cost effi cient and provide excellent service to our clients,” Radajevas emphasised. “We export 90% of our production, mainly to Europe, with Scandinavia accounting for 27%.

The visit to Klaipeda FEZ concluded with a lunch with Viktorija Jureviciute, CEO of Retal Baltic, a member company of the Cyprus-based Retal Group, located in Klaipeda FEZ and a major producer of preforms and HDPE bottle closures.

Talking to the various companies located in Klaipeda FEZ, it soon became clear that the main reason for settling here was in most cases the same: the location.

All the companies visited were full of praise for the proximity to the port, which considerably facilitated import and export logistics, as well as for the people: the high level of training is a major plus, said the NEO Group’s Radajevas. “70% of our workforce, which currently numbers 186, has a university degree,” he said. “And we are going to need another 35 people to run the third production line. Being close to a university offering technical courses, like that of Klaipeda, is vital.”

The ease of setting up a business and the infrastructure facilities available were also an often-mentioned advantage – and one Klaipeda is now working to improve on even further. Klaipeda FEZ is currently investing €2.7 in the construction of a 6,000-sq. m universal prod u c t i o n building for prospective investors – the fi rst of its kind in the Baltics and Poland – which will allow newcomers to commence operations in a mere 3 months. Construction is scheduled to be completed in the spring of 2018, and negotiations with two potential tenants from Western Europe and Asia are already underway.

Launch speed was already a strategic priority, said Klaipeda FEZ’s general director Kiudulas. “Now we are taking another step forward by investing our own funds in the building that future investors can easily modify for their own production needs and start their production operations in 3 months after signing a contract,” he said. Adding: “As soon as all the premises are rented out, we will start construction of a second building of this type.”