For a decade, Klaipeda has been the Sleeping Beauty of the major cities in Lithuania; however, the city can boast the greatest potential and reasonable ambitions when it comes to growth in the research-based industry, IT, and education sectors. This should attract new investors and make the city more attractive for people to move to. Such is the takeaway from what experts in the economy, real estate and other sectors said at the first-ever presentation of business opportunities in Klaipeda, held by the city’s business leaders and local government officials in Vilnius.

Before 2015, Klaipeda was constantly ahead of Kaunas in GDP per capita; however, due to the 2015-2016 crisis and the reduction of transit scale to Eastern European countries, the GDP has not recovered yet and Klaipeda remains the third-richest city in Lithuania. On the other hand, Klaipeda and Kaunas were the major contributors to the positive economic statistics in Lithuania as a whole, following the general downturn of the economy in the European Union and Germany specifically.

Despite that, Žygimantas Mauricas, the Chief Economist at the Luminor bank, said that Klaipeda has a good opportunity to shoot forward, matching what Vilnius and Kaunas did a decade ago and between 2014 and 2015, respectively. To do it successfully, however, the port city should not only hold course where it is strong (the port and industry) but also look for opportunities to grow when it comes to exporting high added-value services.

“The main problems Klaipeda faces, the lack of infrastructure and talent, can also be reframed as opportunities,” Ž. Mauricas said. “For example, Vilnius and Kaunas have a lot of people living there as well and employees working in the high added-value sector. This means that these cities enjoy great flexibility while hiring and firing people. Also, Vilnius and Kaunas are more accessible to investors because they have more business centres. I think that Klaipeda’s business leaders should unite, possibly even make a va bank decision to invest in specific business centres, all to provide a ready space for new companies. The engine of industry in Klaipeda is very strong, but providing an extra push by creating an ecosystem of businesses, academics and talent is also very important when looking for new avenues of growth.”

Simas Simanauskas, the Director of Klaipėda ID, the agency aimed at developing the city, assured everyone that the port city took the first steps towards realizing their ambitious “Klaipeda 2030” strategy. Throughout the next decade, the plan aims to create 25,000 new jobs, attract 1.5 billion EUR in foreign direct investment, see 2,000 companies established in the city and attract 40,000 new people to relocate there. According to S. Simanauskas, 4,500 new jobs were created in Klaipeda in 2019, the city’s population has also grown in population for the first time since 1996. Preliminary data suggests that 3,000 people moved to Klaipeda in 2019.

“Education remains our biggest priority,” S. Simanauskas said. “We understand that the city will not meet its goals without a strong foundation of higher education. This is why we are working with various educational institutions, reviewing study programmes, aiming to adjust them according to the needs of modern businesses. We also united all institutions of higher learning in Klaipeda and created a common marketing programme with the aim of working together to increase the number of students in Klaipeda instead of viciously competing for every single one of them. On the other hand, we wish our graduates to be able to find gainful employment in a company from the services sector, which has experienced the fastest growth (12%) in the city for a couple of years now. Klaipeda was the first city in Lithuania to offer a financial incentive to set up and expand service centres by compensating a share of the rent in exchange for the vow to keep the jobs that are being created. This year, we aspire to offer more tools to integrate returning Klaipeda citizens, keep the foreign students working here after graduation, and create an attractive space for specialists from abroad.”

Eimantas Kiudulas, the CEO of the Klaipeda FEZ, chipped in, saying that the FEZ has been experiencing a real transformation throughout the past decade as well. Starting as a traditional manufacturing zone, the FEZ now has around 10 research centres and laboratories, which increase the added-value of the companies operating them at the FEZ.

“In the past, the FEZ was sold to investors as a convenient infrastructure package and a way to pay less for labour,” E. Kiudulas said. “Today, investors are much more interested in the community and talent, which can not only manufacture but develop products as well. I can only rejoice that the new investors entering the FEZ are researchers and developers who employ the greatest minds in Klaipeda first and manufacturers second. Some of the examples of this concept in action are GRH International, a company from Monaco, which makes modern construction materials and the company which makes Dancer electric buses and embodies the concept of a Lithuanian success story.”

On the other hand, Klaipeda has always been and will remain a port city. The State Seaport of Klaipeda feels that it has outgrown its shirt and is ready for further expansion.

Vidmantas Paukštė, the Director of Infrastructure and the Acting Director General of the Klaipeda Seaport Authority, said that the port plans to invest 600 million EUR into deepening the port, improving navigation and expanding the territory (excluding the outer port). These expansion projects would allow the port to service the biggest of ships, stay current to the present trends in the industry and help to increase the market competitiveness of exporters from Klaipeda and Lithuania overall.

“Everyone can import wares from, say, China; however, by improving the competitiveness of the Lithuanian logistics sector and making it cheaper, Lithuanian products could become much more competitive in the market,” V. Paukštė said. “This is why we have started preparing for the port expansion and hope to continue improving Klaipeda’s competitiveness.”

Mindaugas Kulbokas, the head of Research & Analysis at NEWSEC, an international real estate consultancy company, wished Klaipeda boldness when it comes to carrying out big-scale real estate projects, which could act as a magnet for people and businesses.

“Currently, Klaipeda is not a place you choose to invest in naturally,” M. Kulbokas said. “With that said, there is potential for 130-140 thousand square meters of office space in the city, according to our calculations. I fervently hope that the city institutions will support exceptional ambitious projects like the idea for the multi-functional complex at the mouth of the Danė river. On the other hand, the Lighthouse project, which was successfully developed in Klaipeda commercially successful and, I believe, will inspire other investors.”

The first-ever event “Klaipeda for Business” was organized by Klaipeda ID, Klaipeda FEZ and the representatives from the Port of Klaipeda. 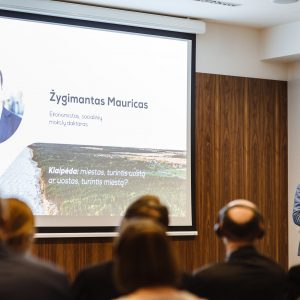 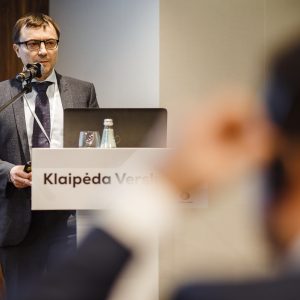 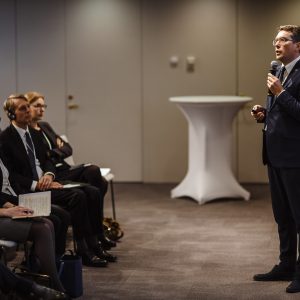 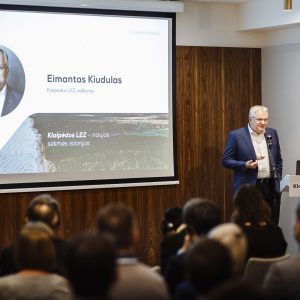 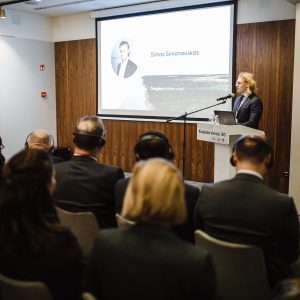 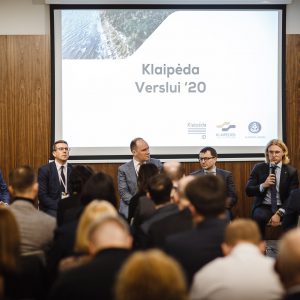 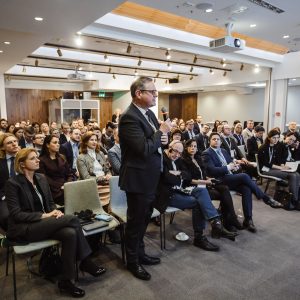 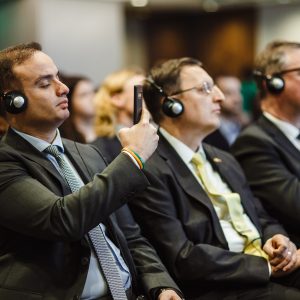 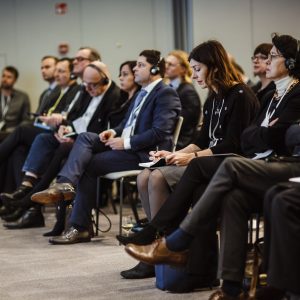 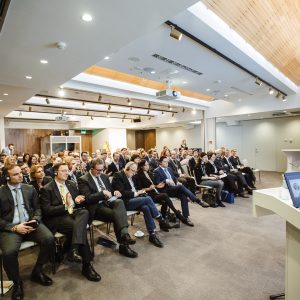